And My Wild Adventure to Spain Begins – Part Two

Last I left off, I said my goodbyes to Mamma Johns at the airport, ready to start my adventure. My new flight from Newark, New Jersey was delayed by an hour and a half, but so far, I would make my connecting flight in Paris. I arrived to the airport at 11:00 pm, two hours before my CURRENT flight time. I was confident nothing could go wrong now. After having your entire trip pushed forward by a full day, it can only go up from there, right?

I walked to the check-in desk, but everything was closed. There were no people—just silence.  After ten minutes of wandering around, I finally found someone who worked there. I asked them why no one was at the check-in desk. The worker told me check-in was two and a half hours ago.

Turns out…I can’t read military time. I assumed the check-in time would get pushed forward with the delayed flight. Nope. The check-in time stayed at 10 pm, three and a half hours before the current flight time. I find it pretty crazy they would have people wait a whole three hours at an airport just because they didn’t want to push the check-in time forward.

So check-in was closed. The man told me he would try his best to see if they were still checking bags, and if not, I was out of luck. Freaking out, I waited as the man casually talked to the other workers who magically appeared behind the check-in desk. I prepared a text to my mom, telling her to be ready to turn around, preparing for another day on the phone with Kiwi.com. After a rapid heart beating minute the man told me they would check my bags. Phew!

I made it to the security line. Of course there was an Asian lady smuggling four suitcases filled with M&Ms. And not to forget the other two suitcases filled with Spam. The security guard made her open every single bag and had to check every single crack, slip, pocket, cranny, ditch, hole of her suitcase, pulling out endless amounts of M&M bags. This held the line. The people in front of me joked that she was getting an early start on her Halloween shopping.

Fast forward to the flight. I was so thirsty. I forgot my water bottle back home. I saw one lady who had the most brilliant idea in the world; she brought her water bottle from home and filled it up after security. What a genius! Unfortunately, I am not this smart, and I went on this flight with a dry mouth. During the flight, I asked the flight attendants for some water. They were about to hand me a full bottle of water and charge me money. I said, no no no, I want tap water. They replied saying, unfortunately, they do not give out tap water.

I’ve never been on a flight that never served me tap water. But I guess that’s what you get for flying cheap. After they denied me water I thought, Don’t worry, Pat. It’s just seven hours. You can make it…So I put my head on the window, and hoped that I could sleep the thirst away and also the thoughts of dying from dehydration. Thinking back, I don’t know why I didn’t just go to the bathroom and drink the water from the sink. Or better yet, maybe I should have just paid for a water bottle. What’s a guy to do? 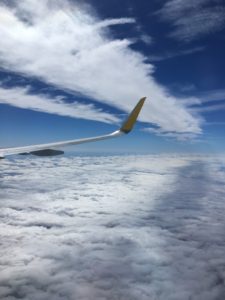 Seven hours flew by (pun intended). We approached Paris, and I was shocked on how flat the entire city and the surrounding area was. I got to see the Eiffel Tower! It was pretty darn cool. If anyone has ever played Sim City, my view kind of reminded me of that. We landed, and I had two and a half hours to catch my connecting flight to Malaga—plenty of time! I was excited to stop for some lunch when I got through security. I hadn’t eaten anything since I left my house.

My time went from plenty to nada as soon as I looked at the check-in line. I waited in the line for one hour and a half. The line was filled with Spaniards. Old Spaniards. As if they all just came back from some wild old-person cruise. No one was comprehending that we were all going to miss our flight. All the old abuelos and abuelas were laughing, chatting, taking their sweet time moving their suitcases forward, but no one was paying attention that we would miss our flight! I kept telling myself, everyone is in the same boat as me; they wouldn’t let all these people miss a flight.

Finally, I made it through check-in and breezed by security, but I had no time for food since they were starting to board the plane. Luckily, Mamma Johns packed me a bunch of yummy goodies, and I had a water fountain close by. So I munched and drank while I waited for the line to shorten. I personally don’t understand why everyone rushes to board a plane. It’s like everyone is fighting to be first. We all have assigned seats. Is there a prize I’ve not been told about for the first person to board a plane?

I boarded the plane, found my seat, and passed da F out.

I arrived to Malaga. I MADE IT TO SPAIN! But little did I know my journey was still not over…

What was your worst travel experience? Share it in the comments below!