A Journey Through the Disney Films: Bambi

Welcome to My Journey Through the Disney Films

I’m on a journey to watch every classic Disney movie. I believe these stories contain themes and elements that relate to living a better life. These stories show us how to become better people, how to grow as individuals, how to enjoy the simple things in life, how to love and sacrifice, how to overcome betrayal and death, and how to welcome in the love from family and friends. They bring out the best in us, and what we learn from them changes as we age. I want to share my experience of what I learn from this journey. 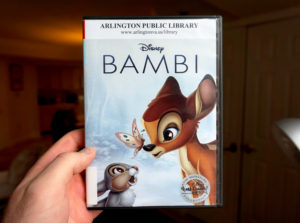 Bambi, a young deer, explores his new forest home with his friends Thumper, a rabbit, and Flower, a skunk. Bambi learns about his new responsibilities of being the young prince of the forest through his friends, mother, and his father—The Great Prince of the Forest. They teach him about the beauty of the forest, the dangers the meadows hold, and overcoming fear of saying hello to a beautiful young doe named Feline. As the seasons change, Bambi grows up, and learns about the tragedy and beauty that his forest world holds for him as he journeys on his path to adulthood.

It takes courage to get up after you’ve fallen down. Bambi has to learn to walk, talk, and overcome his fear of speaking to the ladies. It’s not easy, but he doesn’t give up and he never backs away from something that frightens him. He doesn’t accomplish this alone, however. Bambi teaches us the importance of surrounding yourself with positive friends who pick you up when you fall down and push you to be the greatest you can possibly be.

Bambi teaches us about the journey and the ride. It is important to enjoy the small things in life like the beautiful flowers in the meadow, or the change of seasons. Enjoy it all because you never know when it will be gone.

Life is a Journey of Learning and Growing

‘Everyone Respects him. He is the oldest deer to have lived. He is very brave and very wise. That’s why he is known as the Great Prince of the Forest.’  – Bambi’s Mother

This quote is powerful because Bambi was born to be the new prince of the forest. His future is to take his father’s place as the Great Prince of the Forest. Bambi’s father is wise, brave, and old. It’s as if he had never struggled his entire life, that he was born that way. But Bambi reminds us that life is a journey of learning and growing. It’s okay to ask questions you don’t understand because you need to learn in order to grow as a person, no matter what age you are. It’s always important to learn. Until one day, you become old, brave, and wise and find yourself as the Great Prince of the Forest who needs to teach the new generation about the importance of living.

‘Your mother can’t be with you anymore. Come, my son.’ – the Great Prince of the Forest

Bambi also teaches us how to move on. Bambi lost his mother to Man. But that didn’t stop him from living life. Bambi did not live in regret and he did not live in the past. He kept living in the present. Bambi used the love from his friends to move on from the past and to become the man that his mother wanted him to be.

‘If you can’t say somethin’ nice, don’t say nothin’ at all.’ – Thumper

Thumper’s mother constantly reminded the young rabbit what his father had taught him. One of the lessons was if you can’t say something nice, don’t say anything at all. This is so true in our day and age. There is so much negativity in the world on social media and even in real life. Nothing good comes from negativity. Being positive and saying positive things will make the world a positive place.

“Nearly everybody gets twitterpated in the springtime. For example, you’re walking along, minding your own business, then, you’re looking neither to the left, nor to the right, when all of the sudden, you run smack into a pretty face. WHOO-WHOO! You begin to get weak in the knees, your head’s in a whirl! And then you feel light as a feather, and, before you know it, you’re walking on air! And then, you know what? You’re knocked for a loop! And you completely lose your head!

“And that ain’t all, it could happen to anybody. So, you’d better be careful. It can happen to you, and you! [looks at Flower] Yes, it can even happen to you.”

I love Friend Owl. He is a grumpy old owl who just wants to sleep in peace without the annoyance of all the little animal creatures singing gay songs in the forest. But love is in the air and no matter how much screaming and hooting Friend Owl does, the animals aren’t stopping their tune. He decides to warn Bambi, Thumper, and Flower that love will find them and take the best of them before they know it. But the trio tell Mr. Owl that love will never find them. So they roll off into the forest and one by one they are picked off by a beautiful face, falling in love.

I enjoyed Bambi for its simplicity. There was no complex plot, just a story about a deer growing up and facing the world. I think we are all too eager for our minds to be filled up with craziness. Sometimes, we just need to enjoy the simple things in life. I actually got into a heated discussion about Bambi at a party the other week. The woman I spoke to complained the original Disney movies had no substance, just cute little animals frolicking through the forest with corny music. But I think that’s what Walt Disney wanted to show in his movies: beautiful art, fun music, and stories about characters who love every second of life during the good and the bad. Thanks Walt!

What are your favorite memories of Bambi? Share them below!